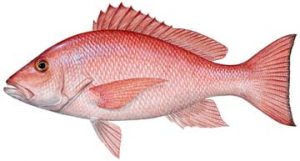 Red Snapper occur in the Gulf of Mexico and in the western Atlantic along the eastern coast of the USA as far north as Massachusetts, but rarely north of the Carolinas. They are absent from the Bahamas and the Caribbean. Juveniles occur in shallow water over sandy or mud bottoms. Adults are more plentiful offshore in 60 to 440 ft of water associated with rough, rocky bottoms and wrecks.

This species feeds primarily on fish, crustaceans, worms and cephalopods. They tend to be nibblers and pickers and soft touch is needed when angling. Red snanpper seem to prefer a still or slowly moving bait. Squid, whole fish and cut bait can be used to entice red snapper to bite. By chummming them up to the surface, flies can also be used.

The Red Snapper is one of the most valuable and heavily exploited snappers in American waters. It is now closely protected; shrimp fishing, accused of destroying young snappers, is currently restricted.